While we were in Paris there were two exhibitions following "Les Nabis". Les Nabis et le Décor at the Musée du Luxembourg and Le Talisman at the Musée D'Orsay. I had never heard about the group before but the exhibitions were fascinating to me. I was particularly fond of the paintings by Vuillard and Bonnard.

The artists formed a group in 1888 and called themselves "Les Nabis" or the prophets. They were inspired by the artist Gauguin and the late impressionists. It all started with the talisman painting by Paul Serusier, called Le Paysage au Bois d'Amour. It uses bright colours and an almost abstract feel. The group included Bonnard, Vuillard, Maurice Denis, Serusier, Ranson and Valloton.
They created joyous and rhythmic works intended to decorate contemporary interiors. There ambition was to create a new art hence the prophets. They were also influenced by Japanese prints, particularly their flat and colourful images. They took themes from association of women with nature, inwardness and spirituality and were driven by the desire to create art available to all. 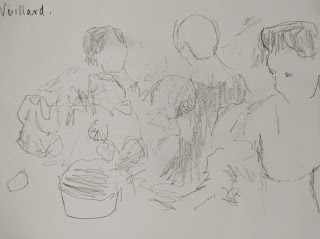 The interior paintings by Denis, Bonnard and Vuillard were the best I have seen. I was particularly interested in Vuillard who seemed to be commissioned to paint interiors for his clients. He worked on a theme of public gardens to produce one set of paintings including a diptych and triptych. At the Musée D'Orsay there is also an amazing oval painting painted by Vuillard which is shown below. I made some sketch drawings at the exhibitions. It was difficult as the exhibitions were packed with people and we had a limited time slot. I made a few notes too - the focal points used quite vivid colours, long brush strokes, slightly pointillist in style. Many of the paintings use a limited palette to great effect.
If you have a chance to see any of these artists I can definitely recommend them. Many of their works are held in private collections but in Paris you can see some at the Musée D'Orsay all year. 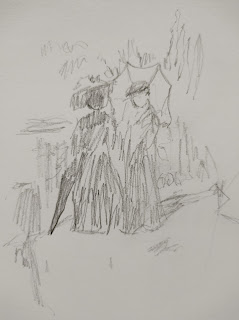