As a way of getting back into my art I have started to do small drawings which I can make into cards.
Here are a couple of my recent cormarant drawings and the associated cards completed. 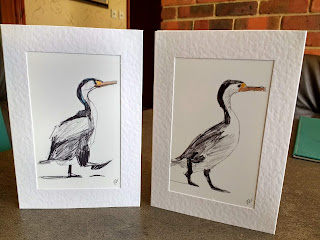 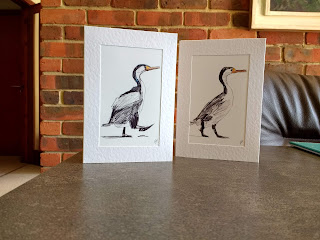 While on holiday in New Zealand we enjoyed many walks taking in the flora and fauna. On this hike we walked from the north beach at Piha to Anawhata beach and back.

Piha is a beach on the west coast of The North Island about an hour from Auckland. It is particularly known for its amazing surf. The backdrop to the beach is sub tropical temperate rainforest of the Waitakere range. The beach has a large rock part way along the beach known as lion rock for obvious reasons. The name Te Piha comes from the Maori meaning divided ripple at the bow of the canoe which the waves breaking around the rock are likened to. Piha is a destination for beach and surf lovers. The sand here is black due to the volcanic nature of the rocks and it has a high iron content.


Our walk took us from the north end of Piha beach on a trail over the headland to Whites beach. It was named after Francis White a blacksmith whose son purchased land here. The family of Sir Edmund Hillary own a bach here. A bach is a small holiday home or beach house.


We took a trail that took us back up the valley onto a track to Anawhata beach. This beach is accessible via a gravel track and then a path that takes you down through groves of Kanuka and Manuka, very similar trees.


There is a very interesting rock formation which looks like a key hole, see photo. There is also a semi circular sand dune at the back of the beach.


On the beach we saw three pied shag (or cormorants) which Hazel regularly sees here. Apparently it is common to see them but they are endangered. They are very majestic birds with long necks and white feathers on the throat and under belly. The eyes are blue and there is a yellow spot in front of the eye which is very distinctive. They are very elegant in the way they walk and also in the way they hold their wings out to dry.