In the summer (Dec to Feb) it is possible to see Australasian Gannets on the New Zealand mainland at Muriwai, about an hour from Auckland. The gannet colony is at Otakamiro point, Muriwai, on the west coast of The North Island. The Maori name for them is Takapu pronounced tah-kah-pooh. Every year the Gannets arrive here to breed and raise a chick. Each pair has a single egg which hopefully hatches into a fluffy white chick. We were lucky enough to visit in February when there were a range of chicks from the white fluffy to those malting and almost ready to leave the nest. The coastline is very fragile here and tourists must stick to the paths and board walks provided. The scenery is stunning and being able to get so close to the birds is a real privilege.

Here are some of our photos:- 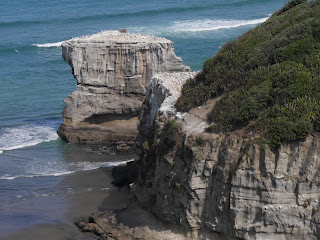 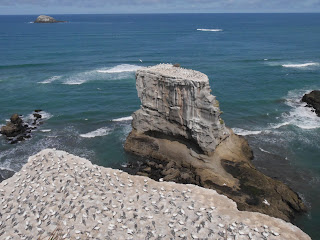 The birds are really beautiful to watch in flight as they sore on the upward drafts. They are notable for their spectacular fishing style, spotting their pray and then diving, wings folded into the sea from high in the air. 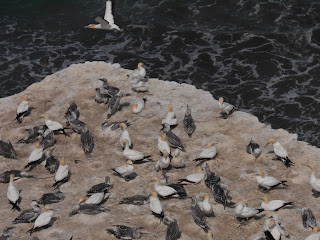 What I cannot do is give you a sense of the smell but if you can imagine a lot of sardines just eaten then that would be about right!

The adult birds are quite large and make a rather risky nose dive to land somewhere near the chick. Often they are then pecked at as they try to get to feed their chick. You will notice that the scrapes/nests are around a pecking distance apart! 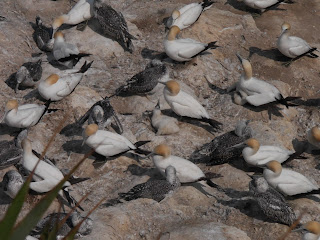 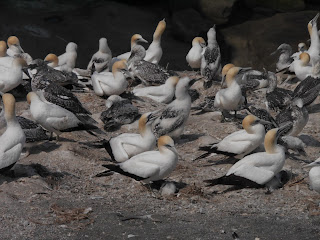 This parent has had a late chick, he waits while the other parent fishes. As they get bigger both parents fish leaving the chick to fend for itself. 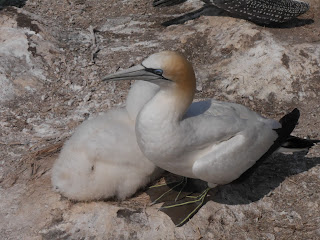 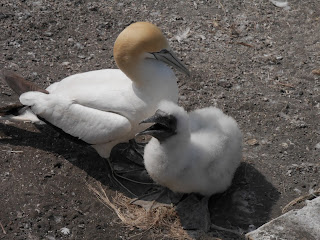 What a real privilege to be able to see these amazing birds.

Here are some of my drawings of New Zealand fantails. These birds have a personality of there own. In the forest they seem to find you and when they do, they flit around sort of leading you on. They don't sit still for very long so my pictures are done from photos we took. I just love them as they appear to be talking to each other, cheeping, we often saw them in pairs. 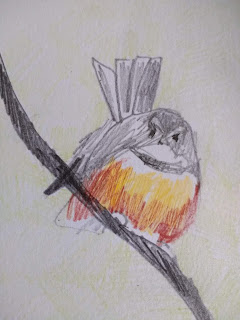 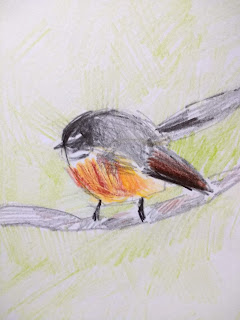 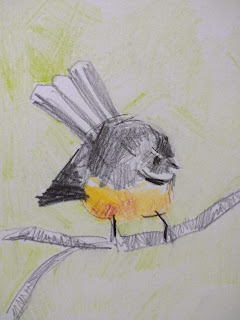 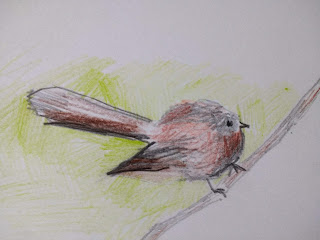 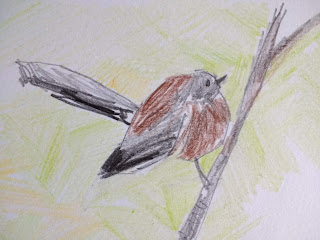 On our visit to New Zealand I have been fascinated by all the different birds we have seen. We saw the New Zealand fantail on many of our walks and even in the garden. Their Maori name is Piwakawaka which I also quite like. 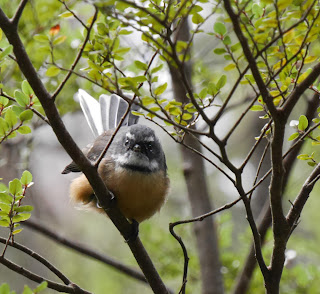 They are similar to our British tit family in size but they have a fantail. The breast colour varies from a russet brown to a sooty black. The tails are flickering silver and black with the centre feather quite often black although we did see both pure black fantails and pure while fantails. The two distinct types are the common pied fantail and the black fantail (less common 4%). The common fantail has distinct flashes of white, over the eyes, under the beak and on the wings. They use their fantails for flight, feeding and display. They can use the fantail to sweep across foliage and dislodge insects which they eat. We noticed that they were often seen in pairs.. They tend to flit from perch to perch and they are quite agile in flight twisting and turning. They are quite difficult to photograph as a result. 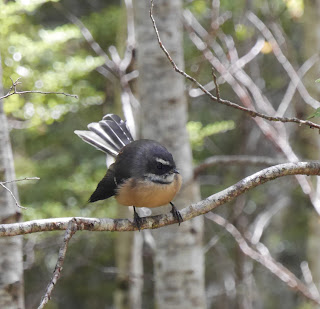 We saw black fantails on the Kepler track between the control tower to rainbow reach. The majority of the time we saw the common fantails. 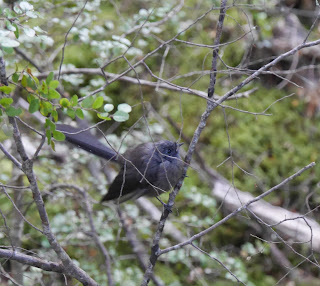 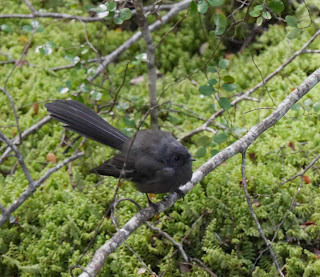 Life in our bubble

Today is Monday 6th April. I had a good nights sleep and feel quite rested. The world outside here was calm and relaxed. The noise was low and there wasn't too much light last night.

I have been for a walk in our local park called Heron Park named after the white-faced Heron. It is a lovely park with lots of paths, some in the open and some through the trees. I have noticed that the white faced Heron is smaller than our UK Heron and has yellow legs. I will be doing a bit of research to find out more while in level 4 lockdown.

I met and talked to two people on my walk at 2m away. One was from American Samoa called Martin. He was tending to the garden of a house. He had a lovely smile on his face, he said he enjoyed the outdoors. It was difficult for me to understand him but we both agreed that it was lovely to be in the outdoors and say how much we loved it.  The second person or people was a mother and her daughter. She was speaking French so I said Bonjour. That started a conversation in French, gosh it all flooded back .. I love the language. I have never been that good at it but it was lovely to renew and practice. The lady said she and her husband had been living here in New Zealand for 9 years. I spoke to the daughter in English I asked her her name and she game the name of a character in Frozen, Elsa. Her mother tried to get her to give her real name.