During our trip to Paris we visited the studio and national museum for the artist Eugène Delacroix. Prior to our visit I was not familiar with this artist, but I think his history is worthy of note as an accomplished French Artist and having an influence on the impressionists.

He was born during the Napoleonic reign with his career following waterloo. It was a rebellious and romantic period. Perhaps his most famous painting is "Liberty leading the people" which is housed in the Louvre. The louvre has a number of his larger works which we didn't have time to see (another time). During his life he also produced a number of drawings and lithographs including some of Shakespeare's works.

He himself was influenced by the artist Ruban's but also by famous writers and musicians. He used expressive brush strokes which were a precursor for the impressionism movement. Both Renoir and Manet were followers of Delacroix and copied some of his works. 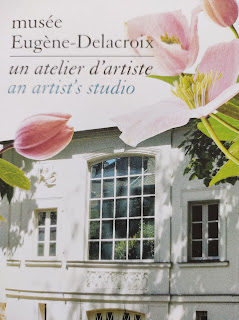 In 1847 he moved to 6 rue de Furstenberg, Paris 6eme. He had a studio built in the garden. He moved there as it was within easy walking distance from church of Saint Sulpice where he had a big commission to decorate the church walls. The two paintings of note are "Jacob wrestling the angel" and "St. Michael slaying the dragon". The figures and the surrounding foliage really are striking and very much larger than life yet full of life. I spent quite a while looking at the paintings, unfortunately I didn't have my sketch book that day. They are very impressionistic in style.

Delacroix worked in his studio until his death in 1863. He had a house keeper, Jenny, who guarded his privacy. The studio and apartment now houses the Musée national for Delacroix. The studio and garden are beautiful although I wish they had left the studio as one might have found it rather than an exhibition space. The big studio window is amazing and provided a good quantity of light for his work.

I found a quote of interest about him .."Eugène Delacroix was a curious mixture of scepticism, politeness, dandyism, willpower, cleverness, despotism and finally a kind of special goodness and tenderness that always accompanies genius".